In the early 1990s, the Spirit of the Lord was moving in the hearts of local Christians to start an elementary school. On March 20, 1992 there was an initial meeting of a small group of excited pioneers. Soon thereafter, an open meeting for the community was held and we discovered there was a definite interest in a private, Christian school. 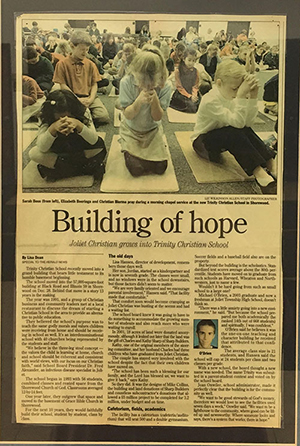 On August 27, 1993, Joliet Christian School opened its doors in the basement of Shorewood Church of God with an enrollment of 57 students. We quickly outgrew our first location and moved into the lower level educational wing of Grace Baptist Church in November of 1994.

In August of 1994, JCS expanded with a preschool for 3- and 4-year-olds in two locations, Westview Baptist Church and Judson Memorial Church. The Lord’s vision for JCS again extended beyond its current home to an independent facility.

On December 27, 2003 Joliet Christian School moved into our current facility at 901 Shorewood Drive. Our school name was changed to Trinity Christian School and the Lord has been faithfully bringing us new families since.

With the continued increase in enrollment came the need for more space, and in 2010, Trinity opened a new middle school wing. The expansion provided a new home for our middle school students as well as permanent homes for our art and music classrooms and a practice gym for our students. We celebrated our 25th year during the 2017-18 school year.

The current K-8th grade enrollment is about 250 students, and our preschool now has an enrollment of about 200 little ones. While the students and teachers have changed through the years, Trinity is blessed to have some of those same pioneers as volunteers and members of our school board.

Throughout the years, the Lord’s blessings and provision have been on Trinity Christian School. Our student enrollment continues to grow as the Lord guides us in the vital mission of “Growing His Kingdom … one student at a time.”

As God leads and provides, future expansion plans include the potential for a high school. We praise God for His faithfulness in establishing Trinity and nurturing its growth. It is to Him we give the glory!